BATTLE OF THE FRIGHT NIGHTS 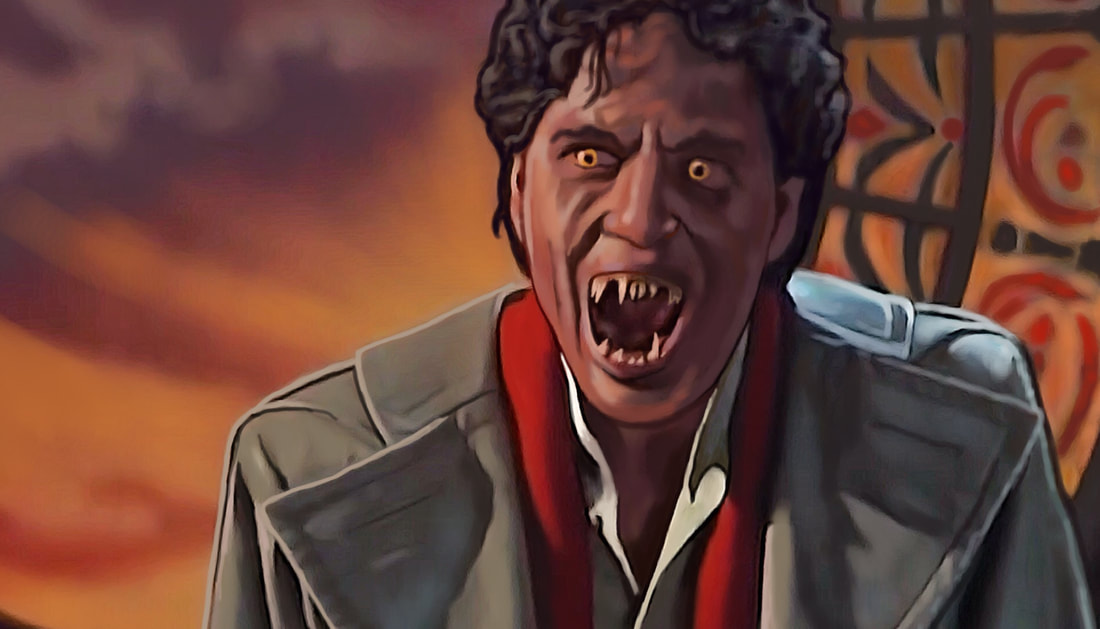 The new Fright Night was one of my most anticipated movies of the summer season and it's finally arrived. Rather than doing the usual review, I thought I would offer a side-by-side comparison of the film and its progenitor. Regardless of how things shake out on the individual topics, the new film is very good and definitely worth seeing. Let me know your thoughts on which version you preferred.

Winner: 2011 version
Why: Although I liked William Ragsdale's Charlie, he was 24-years old when the original film was made and his corduroy blazers with the patches on the elbows did nothing to give him the illusion of being a teenager. (I can personally attest that NO 17-year old in 1985 wore clothes like that!) Anton Yelchin's Charlie, who vacillates between cool and awkward, is a much more convincing teenager. (Okay, okay... Yelchin's 22, but he doesn't look it.)

Winner: 1985 version
Why: I speak a little more about the various traits that make both the Jerrys compelling characters below, but overall Chris Sarandon's version is still my favorite for his cool creepiness swathed in argyle sweaters. Colin Farrell's vampire is more menacing, but what's missing is the seductive quality that Sarandon embodied so well.

Winner: 1985 version
Why: I love you, David Tennant, but for me Peter Vincent will always be a flamboyant, slightly-swishy has-been hosting late night television (Roddy McDowell), not an Aldous Snow imitation with a Criss Angel style stage show. There was also a certain compassion to McDowell's Vincent that isn't in the new, hedonistic version, as when he watches Evil Ed dying. Plus, I still can't figure out why a stage magician knows so much about vampires.

Winner: 2011 version
Why: Stephen Geoffrey's Evil Ed is easily my least favorite thing about the original film. His horrendous acting and screeching voice made him the Pauly Shore of his time. And while Christopher Mintz-Plasse runs the risk of being typecast by doing another role as the loser-with-attitude, his Ed is much preferred. Plus, he dies early and you don't have to see him again until the end of the film.

Winner: 2011 version
Why: See my comments above regarding the Evil Ed character and most of it applies here too. Plus, the only voice more grating in the original movie than Stephen Geoffrey's was Amanda Bearse's.

Winner: 1985 version
Why: In an era before CGI, you had to do a lot more with less and the makeup artists in the 1985 version really outdid themselves on making Jerry Dandridge just a little... off. The best scene for a creepy appendage? When Charlie watches Jerry seduce the young woman in his upstairs bedroom... before the vamp slowly closes the blinds with his four-jointed fingers. Super cool.

Winner: 2011 version
Why: Come on! Stucco and tile tract-houses in Las Vegas? That's creepy even without vampires.

Winner: 2011 version
Why: I don't know, but action is just filmed better now than it was in the 80s it seems. Most of the action in the first film had to do with creeping around, but the 2011 version offers some high suspense and a great car chase scene too.

Winner: 1985 version
Why: Hey, they had to do it old school and they did a good job. Yes, you were more aware of the effects when they happened than you are with CGI, but weren't they beautiful nonetheless?

Winner: 1985 version
Why: The best song in the new version, "99 Problems," is actually at the end of the film as the credits are rolling. But the original is filled with all kinds of classic 80s electronica, including "Fright Night" by the J. Geils Band, "Save Me Tonight" by White Sister, "Rock Myself to Sleep" by April Wine, "Armies of the Night" by Sparks and "Good Man in a Bad Time" by Ian Hunter.

Winner: 1985 version
Why: "Welcome to Friiiiight Night... for real." It was uttered in both movies, but Sarandon made it great... along with so many other lines from the 1985 flick.

Why: Although the newer version has some strengths as noted above, cumulatively it's just not as strong as the original, classic film. I guess that's why the 1985 version is a classic, right?