I had dreamed of visiting Greece ever since high school when I first read The Iliad and The Odyssey. At the University of Arizona, my studies in art history compounded my fascination with ancient Greece. But for the time being, my experience with the country and its culture was confined to the descriptions and the washed out slideshow images offered by my professors. After graduation, I felt even more compelled to make it to these places which were, quite literally, the stuff of legends.

It would take many years, but I would finally make it to Greece.

If you're an American, it may be difficult to fully appreciate the aging grandeur of places like Greece. After all, recorded history on the North American continent is barely a footnote in the annals of humankind, and nothing in comparison to the millennia-old cultures of the Mediterranean, Europe, Africa and Asia. During my two weeks in Greece, I managed to make it to most of the important ruins like the Acropolis in Athens and the temples of Delphi. But one of the most significant sites for me wasn't a ruin at all, but a picturesque cove and a nearby cave hidden high on a scrub-covered hillside.
This half-moon-shaped inlet on the west side of the Peloponnese is called Voidokilia. Hidden from both the elements and human eyes by rolling sand dunes and craggy cliffs, its a perfect retreat for enjoying the sun and sea without enduring crowds of tourists.

There are no ruins at Voidokilia, but it doesn't matter because the very landscape is what's important. In ancient times — those times described by Homer in The Illiad and The Odyssey — this was a harbor for Nestor, King of Pylos. (A few miles to the north are the ruins of Nestor's Palace. You can visit there too — it's now a museum — and walk the nearby woods where the beehive-shaped tholos tombs of the ancient Mycenaeans are an unusual and somewhat eerie diversion.)

The sandy Voidokilia beach is where Odysseus's son, Telemachus, puts ashore accompanied by the goddess Athena while searching for his missing father. He finds the beach filled with revelers, as Nestor is hosting a feast in honor of Poseidon. Although the old king lavishly entertains young Telemachus, he cannot provide any new information about Odysseus's fate and suggests the youth continue his quest in Sparta. These passages from the Odyssey are important because they reinforce a major theme in the legend – fidelity to one's parents, partners and friends. 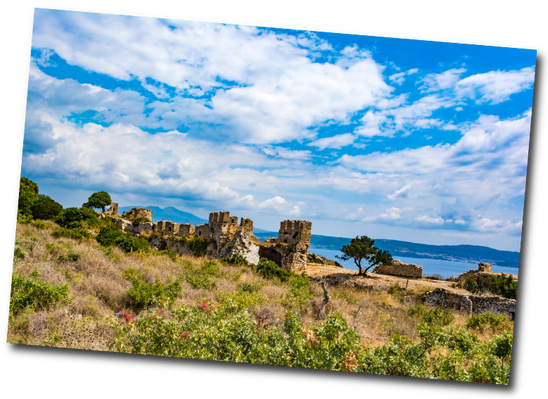 Above the cove is a cave. There aren't any signs leading to it and it's hard to see from the beach, but thanks to my guidebook, I was prepared. I hiked up a steep sandy berm on the south end of the cove, which was the most strenuous part of the journey and somewhat akin to sifting powdered sugar with my feet. I then made my way across the back of a scrub-covered ridge, pausing to photograph both the cove and the Ionian Sea to the west. On the summit above me were the ruins of a 13th century Frankish fortress commonly known as The Old Pylos Castle (shown right). The cliff-tops were also used in Classical times as a naturally defensible area which overlooked the bay. The cave doesn't have quite as illustrious a history as the beach and ruins nearby. According to legend, this is where Nestor sheltered his cattle during bad weather. It held a similar purpose for me, providing a cool resting spot after my hike through 100-degree weather.

​The cave was unremarkable, an egg-shaped cavity which smelled faintly of wet earth. Certainly it will never be mentioned in the same breath with contemporaneous sites like Mycenae or Troy. The main room seemed large enough to hold a small herd of cattle, and I couldn't help but imagine the noise and smell this would've produced. As I exited, I found Homer's ancient world neatly framed by the mouth of the cave. The brilliant blue curve of Voidokilia... the flat scrubby plain of the Greek countryside... The low foothills where Nestor's crumbled palace still lay... It all stretched out in front of me. There were no throngs of tourists and the only sounds were the wind and the surf far below. Standing there, I felt more connected to Greece than I had anywhere else on my journey.

Probably you won't find Voidokilia in most Greek travel guides. It's not particularly close to any tourist destination and the road in is an unmarked and meandering route. But if you can find it, plan to spend some time. Sunbathe, snorkel, take a picnic... but also climb the hillside to the cave and reflect on the great legends this place inspired.