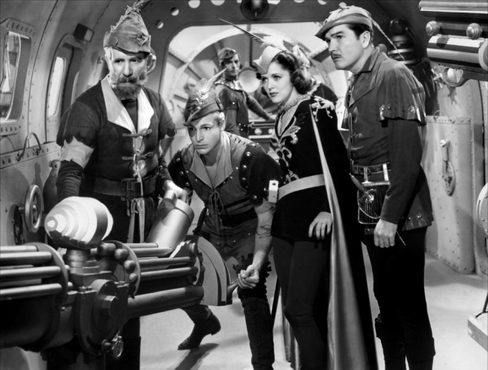 Buster Crabbe (second from left) and costars from Flash Gordon Conquers the Universe (1940).
BACK TO STORYTELLING

​My dad loves to tell stories about growing up in the 1930s. His recollections almost always begin with the words: "Now you won't know about this, but when I was a kid..."

It took a long time for me to convince Dad that I actually do know about things which happened outside of my lifetime. It's taken even longer to convince him that some of the things he remembers so fondly aren't particularly unique to his era. Recently he reminisced about going down to the cinema as a boy, plopping down a nickel and then spending the day in a darkened theater watching the latest westerns or adventure stories. He also spoke fondly about the serialized melodramas which preceded the main features. There were a lot of these shorts in the 30s and 40s and they covered many different genres. The ones my father remembered best were the Flash Gordon serials starring Olympic medalist-turned-actor, Buster Crabbe (shown left).

Dad spoke as though this particular art form was something from the distant past, now lost to the ages. But thanks to the miracle of Netflix, I know this just isn't so. Intrigued by my dad's stories, I watched some of the same Flash Gordon adventures he enjoyed seventy years ago. I laughed as Buster Crabbe ran around in his Lieutenant-Dangle-style hot-pants fighting rubber monsters while villains (mostly racist caricatures of Asians) stroked their long wispy beards and menaced shrieking damsels. As I watched, a feeling of familiarity swept over me... and I realized I too had enjoyed this same kind of serial storytelling as a boy. 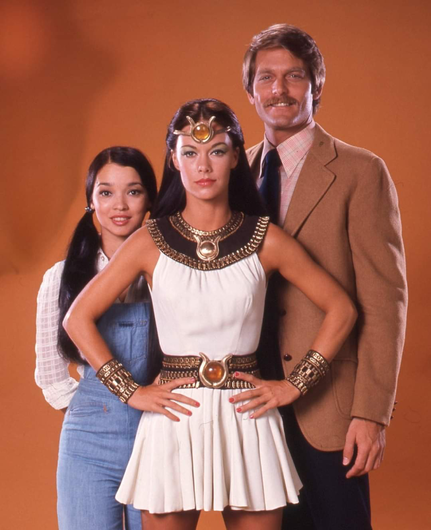 Joanna Pang, JoAnna Cameron and Brian Cutler from the Secrets of Isis (1975).
Now my weekend serial entertainment didn't come in theaters but rather through the teetering television aerial on our roof. If you grew up during the 1970s and 80s, you might recall titles like Space Academy, The Shazam-Isis Power Hour, Jason of Star Command... Like the Buster Crabbe films, most of these shows were short, often with cliff-hanger endings which kept you tuning in from week to week. There were also plenty of rubber monsters and bearded villains... though the damsels shrieked less and seemed more empowered despite their skin-tight space garb. Because it was also Saturday morning TV and had to make at least a passable attempt to provide lessons to young minds, usually these stories were infused with morals about friendship, racial tolerance, war and compassion. Such messages were in the serials of the 30s and 40s too, but perhaps not quite so obvious.

I don't know if Jason of Star Command will ever be remembered alongside Crabbe's Flash Gordon as a great science fiction achievement, but perhaps it's just too young to be so venerated. Give it another fifty years.

Regardless of the era, serialized drama is an effective way to tell stories. Even primetime science fiction and fantasy shows are engaging more and more in the grand story-arc, told in weekly snippets. Just think how Lost, Fringe, The Walking Dead and others tell stories. Sure, the techniques might be more sophisticated, but the process is just the same. It's also a noticeable change from similar television of even a few years ago which was firmly episodic, such as Star Trek: The Next Generation and Farscape.

If you have the time and inclination, check it out for yourself. Watch a few episodes of Flash Gordon back-to-back with Jason of Star Command and tell me they aren't drawing off the same storytelling tradition. I wonder if this would convince my dad? 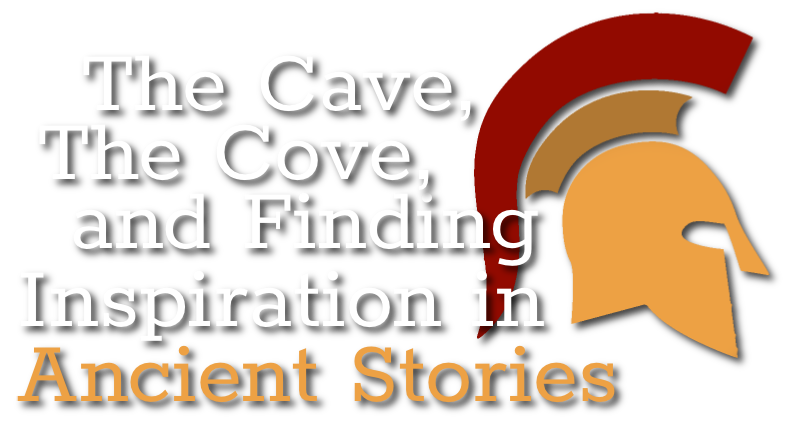 With most of us practicing social distancing, the COVID-19 world has become a very quiet place. Document this rare tranquility with  a short video.

​During a Pride Month held in the midst of a pandemic as mass protests against racism continue, I asked young people about their thoughts on the world today... and about their hopes for a better tomorrow.